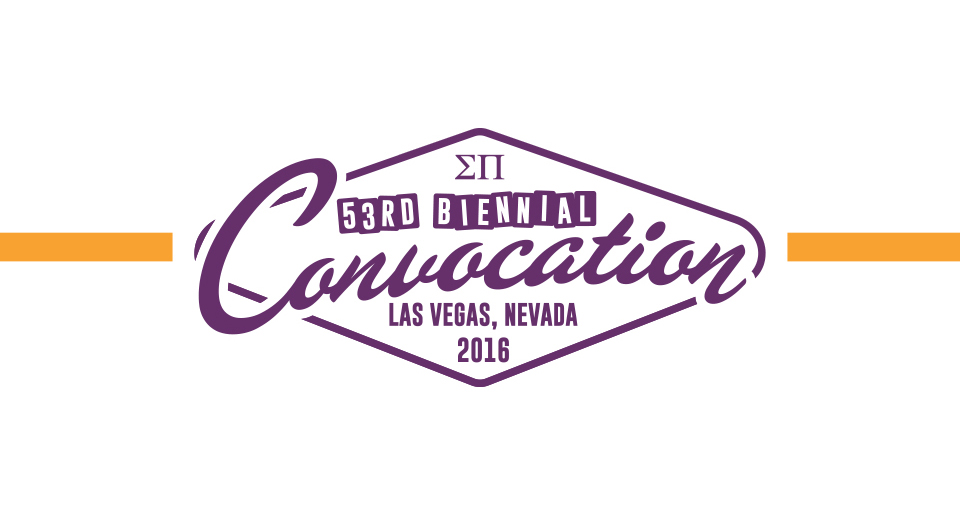 This story was printed in the Fall 2016 issue of The Emerald magazine.  If you do not receive printed issues of the magazine, but would like to, then please opt-in at sigmapi.org/updateinfo.

From July 27 through July 30, Sigma Pi brothers gathered as the Grand Chapter of Sigma Pi Fraternity, International at the Flamingo Hotel in Las Vegas, Nevada to celebrate the 53rd Biennial Convocation.

More than 350 brothers, vendors, and friends joined together from all over North America in Las Vegas for Convocation on Wednesday, July 27. The joyous event began with the opening procession, seeing Grand Sage’s Award winning chapters, Past Grand Officers, Founders’ Award winners, Educational Foundation Board of Trustees, and many others introduced to the Grand Chapter.

Sigma Pi was also grateful to welcome many great vendors for the occasion, including: Spirit Recognition, Greek State of Mind, OmegaFi, Greek Capital Management, Collegiate Regalia, JusCollege, and Donate Life. These vendors showcased great services and products, and attendees were able to converse with the vendors throughout the conference.

On Thursday, the official business portion of the event got underway. Following the first business session, a luncheon was held where candidates for Grand Council were given the opportunity to speak about their intentions for serving on the Grand Council. Afterwards, a public forum for the candidates allowed them to answer questions one-on-one with undergraduates and alumni. North-American Interfraternity Conference President & CEO Jud Horras presented the “NIC 2.0” concept to the Grand Chapter, which you can read more on at nicindy.org/about/2-0.

After the last business session on Thursday, the Historical Society held their biennial meeting, and then assisted in performing a model initiation for the Grand Chapter. The Educational Foundation also hosted an event on Thursday night in which donors attending Convocation, as well as alumni living in the area, were invited to attend.

The Grand Chapter Awards Luncheon followed, where many chapters and individuals were honored with awards. Afterwards, meetings continued, and on Friday night, the Historical Society hosted a dinner at Margaritaville inside of the Flamingo Hotel.

For the traditional close of Convocation, all brothers circled the ballroom, locked arms, and joyously joined in the singing of “The Fireside Song.”

The 53rd Biennial Convocation was a great success. Congratulations to the chapters and individuals honored, as well as the new Grand Council Officers!