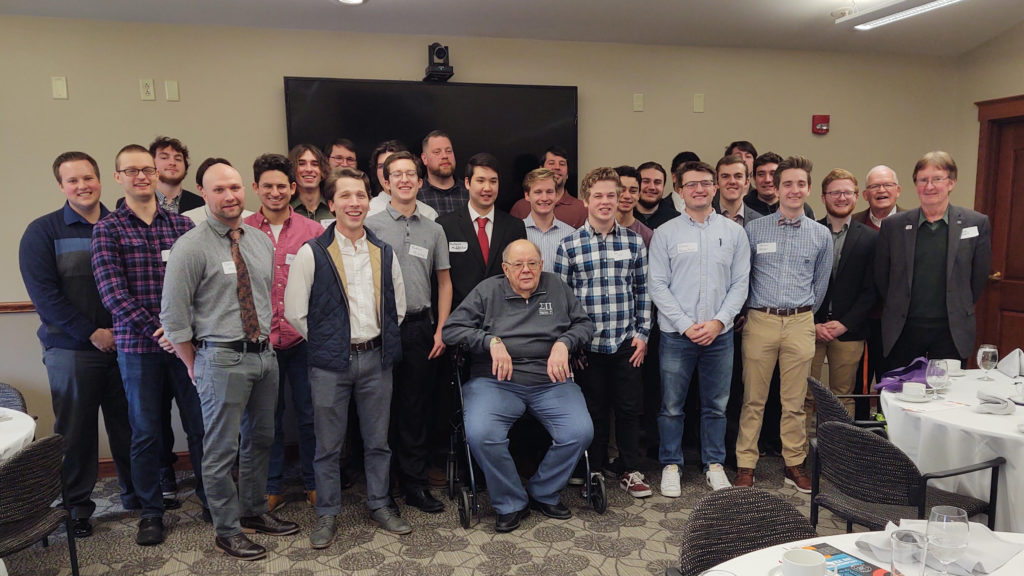 This year is not only historic for the Fraternity as a whole but for one chapter, in particular: Zeta Chapter at Ohio Northern University.

During a celebration held on February 26, 2022, the Fraternity’s 125th Founders’ Day, the Chapter gathered on campus for a luncheon to reflect on the history of Sigma Pi and look back at the last 110 years of Zeta Chapter.

The luncheon was attended by more than 40 people, including brothers who were part of new member classes dating back to 1959. As Karl May (’68) said: “It was pretty remarkable to have the Ohio Northern 150th, the Sigma Pi 125th, and Zeta Chapter 110th all come together at the same time! I’d like to credit Don Beal (’60) for noting the timing and suggesting that we hold the event on that day.”

The event began with current Sage Justin Hall (’21), who spoke on the undergraduate members’ involvement, including large membership in University organizations such as sports and extracurricular groups. Zeta Chapter is one of the largest chapters on campus and holds a chapter GPA of 3.3.

“Being Sage during Zeta Chapter’s 110-year celebration has been time-consuming and lots of work, but it is an experience I will never forget,” said Hall. “Being a chapter president can be a lot of work, as some may know; however, having such supportive alumni just like we have from Zeta Chapter and having brothers to call on makes things that much more enjoyable. Zeta Chapter is in a very unique situation; we are in the works of potentially building a new chapter house. We are working with new state anti-hazing laws and above all, establishing relationships with brothers and community members from all over to ensure our brothers of Zeta Chapter are always ‘Advancing truth and justice, promoting scholarship, encouraging chivalry, diffusing culture, and developing character!’”

Bob McCurdy (’61) shared some words at the event as well. When asked about his Sigma Pi experience following the event, He had this to say: “I was fortunate enough to be [new member educator] and chapter Sage, and during that time I assisted two senior brothers in writing “I Believe,” our National [New Member] Manual. I’ve had the opportunity to attend five Convocations and serve as Province Archon in New England and Western Pennsylvania/NE Ohio. Sigma Pi cared for me, and I have tried to pay it back ever since, hoping to make the future a bit brighter for other undergraduate brothers!”

Next, Don Beal highlighted the accolades Zeta Chapter has accomplished throughout its history.

Zeta Chapter was the seventh Sigma Pi chapter to be colonized, founded on June 1, 1912. It was the third Sigma Pi chapter in Ohio and the second national fraternity to join the campus community at Ohio Northern.

The Chapter had the honor of hosting the fifth biennial Convocation in 1916. By the time the 1962 Convocation rolled around, Zeta Chapter brought home the gold for the Attendance Award for the largest delegation of active members and alumni. The Grand Council had established the Grand Sage’s Award and Zeta Chapter was the first recipient of the trophy.

Beal said, “I met so many people throughout my time who were important or became important in their postgraduate years. Whether in their business involvements, social involvements, clubs, or other organizations.”

By the time Zeta Chapter had made it a century in 2012, they felt on top of the world. By this point in time, the brothers of Zeta Chapter had left their mark on Ohio Northern. To name a few key roles in the campus history, there have been:

But like other chapters, Zeta Chapter faced hardship, too. In December 2012, Ohio Northern suspended Sigma Pi from its campus, and Sigma Pi Fraternity withdrew the Chapter’s Charter, under an agreement that the Chapter could return in four years. A group of Zeta alumni, determined that Zeta would return, worked to ensure that a team of alumni were in place to bring the Chapter back, and by spring 2017, Sigma Pi Fraternity had re-colonized Zeta. One year later, on April 7, 2018, Zeta was officially re-established as a Chapter with 45 new initiates on that day.

As one of the Alumni involved in the re-colonization process (and the organizer of the February 26 event along with Bob McCurdy), Karl May observed that “Too many of our Brothers leave ONU and never think about Sigma Pi again. I was the opposite; I quickly realized that I am, and even more, wanted to be, a Sigma Pi for life. Sigma Pi had given me so much and meant so much to me that I wanted to give something back. I wish more of our Brothers felt that way, but I have learned that although many Brothers may lack that dedication, there are others who have within themselves the dedication of many. They are the ones who will always be there for our fraternity and for Zeta Chapter.”

“The changes at Zeta Chapter since I joined have paralleled the changes at the university itself,” said Beal. “As a Province Archon, I saw it at the other chapters I visited as well. At the base of that was the importance of being Sigma Pi. I found that with the others that came along each decade. I saw the deep importance that the undergraduates had for being members of the Fraternity. It was as if they needed to be members of something bigger and didn’t want to see it diminish.”

Throughout its 110 years, Zeta Chapter has migrated through six houses. The most recent chapter house located on Ohio Northern’s “Fraternity Circle” will be razed in fall 2022, and discussions are being had surrounding a new house to be built soon, with intentions to build the new chapter house in the same location on Fraternity circle pending Ohio Northern approval.

As these members look forward to their next 110 years, Zeta Chapter has strong alumni leadership and an engaged undergraduate group that will set them up for success as they continue to progress through their Sigma Pi experience.