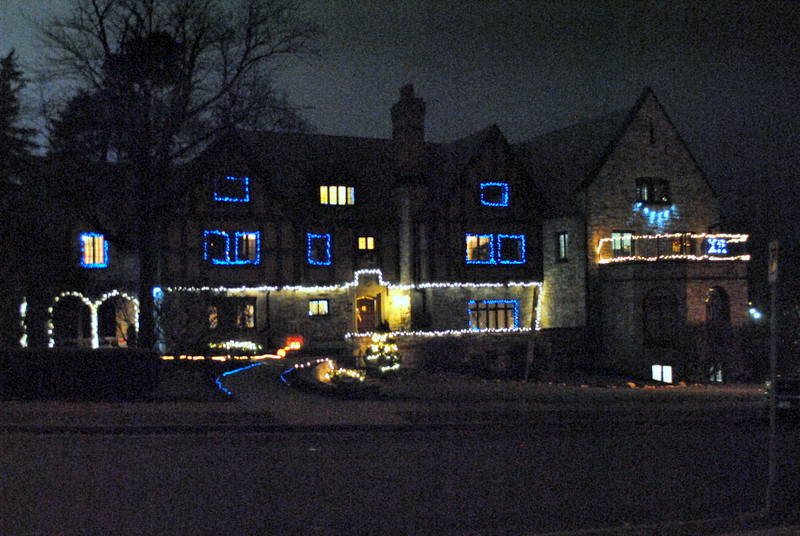 Editor’s Note: This post was originally written by Michael Henning and intended for Daily Collegian, the student newspaper for Penn State. If you would like to read this article how it was intended, please click here.

A trademark of the winter holiday season in State College is holiday lights adorning fraternity houses.

This year the Penn State Trolley escorted students, parents and children around Fraternity Row to admire the hard work put into each house’s design of holiday lights.

“It is something everyone looks forward to, we just love putting the lights up,” Matt Aquilino (senior-biology) said.

Aquilino is the Interfraternity Council vice president for programming. He also said being in charge of the lights is a “competitive” position and that upwards of 10 brothers run for the position every year.

The tour began at Sigma Pi, 303 Fraternity Row. The door of the house was open and the inside was just as decorated as the outside was. When the families walked in the door they were greeted with holiday music and a large tree with more lights. Once inside, a spread of free cookies and hot chocolate were displayed for everyone to enjoy. There were also sheets of paper with a list of every house that would be on the tour and a box of pencils. The families were supposed to take the list and, while they were on the tour, rate each house on a scale of one to five.

From Sigma Pi, the trolley ventured around the Penn State campus and downtown State College to see 27 houses. Each house had a different theme and design. The tour guides, members from Sigma Pi, pointed out every house on the tour and shared a piece of history about them. The history included the name, the year they were founded and notable alumni.

The bus was full of children of all different ages and their parents ready to enjoy the lights on the houses. Throughout the ride the kids were very vocal with their review of the house. There were constant “ooohs” and “aaahs” during the entirety of the ride.

The parents were just as excited as the children were. Nick and Kristin Bushong, from State College, were there with their son Emmett for the first time this year.

“We are very excited, it all seems pretty cool,” Kristin Bushong said.

Nick Bushong said they also were excited to ride the trolley.

However their son Emmett was there for different reasons.

Another review came from Hannah Reitz, 3, who said, “I love Christmas, I just love it.”