HGS Jim Hills Has Passed to the Adytum on High 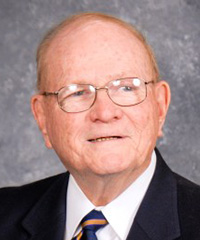 On Monday, February 3rd, Sigma Pi lost a great brother and friend, HGS Jim Hills (Alpha-Chi, Maryland ’54). Through his work, he has shown members what it means to be a Sigma Pi, and was dedicated to our beliefs and values. Jim will be sorely missed, and his devotion to Sigma Pi will forever be remembered.

While Hills was a student at the University of Maryland in 1948, he joined Sigma Pi Fraternity.  This, in turn, launched his 66-year relationship with the Fraternity, serving on both a local and international level. He was a Founding Father of the Alpha-Chi Chapter of Sigma Pi at the University of Maryland and served as the Chapter Sage.  From 1954 to 1971, Hills held national positions as Field Representative, Executive Assistant and Executive Secretary with the Fraternity.

As Executive Secretary, in 1963, he supervised the move of the Sigma Pi Executive Office from Elizabeth, New Jersey to Vincennes, IN. In 1965, Hills also played a role in re-establishing the Fraternity’s mother chapter, Alpha, at Vincennes University after a 55 year hiatus.  In the late 1980’s, he was part of a group that was instrumental in the construction of the current chapter house of the Alpha Chapter, as well as raising the funds and building the Sigma Pi Clock Tower, which commemorates the centennial of the Fraternity’s founding.  The alley behind the chapter house is named in Hills’ honor.

In 1992, Hills was given the title of Honorary Grand Sage of Sigma Pi Fraternity, International; an honor bestowed upon only six men in the Fraternity’s 117-year history. He received the Fraternity’s Founders’ Award in 2000, which is the Fraternity’s highest and most prestigious form of recognition. More recently, he served on the boards of the Sigma Pi Educational Foundation and the Sigma Pi Fund. Hills also founded the Alpha Alumni Association. At the time of his death, he was the President of the Alpha of Sigma Pi House Corporation, a position he held for 16 years.

Please join the family, friends and Sigma Pi brothers as we pay our final respects to the man that meant so much to all of us on Saturday, February 15, 2014 at St John’s Catholic Church, 803 Main St, Vincennes, Indiana 47591.

The family has set up a Facebook page for the service in order to properly plan for the total number of attendees. Please let us know if you will be at the service by visiting the page here. If you are an Alpha Alumnus, please register under the Alpha of Sigma Pi Alumni FB Page. Visitation is set for 9:00am EST, and the service will be held at 11:00am EST.