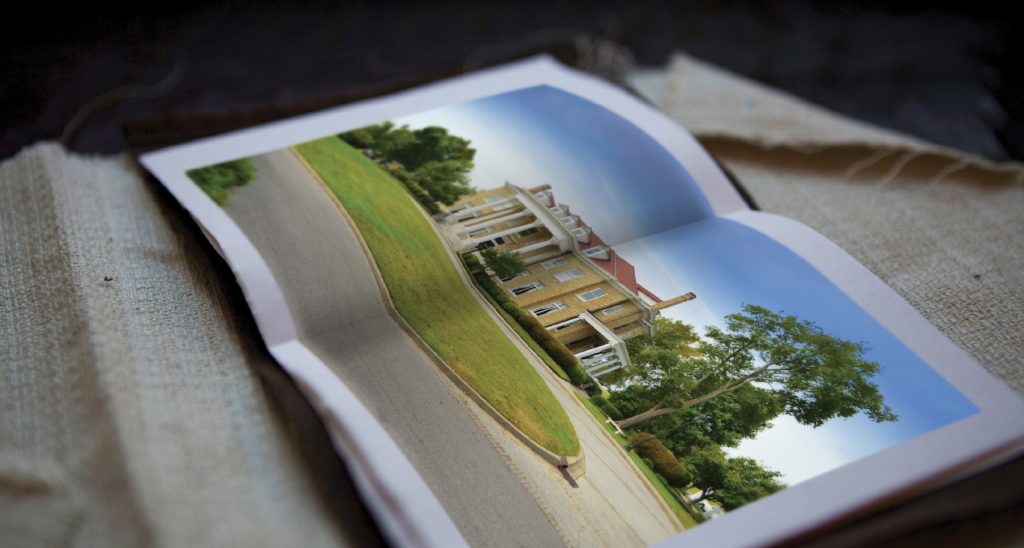 As the 117th year of Sigma Pi Fraternity approaches, we embark on a new journey together; a journey that will revolutionize the image of our beloved brotherhood.  We, as brothers, can now call the Mitchell House – a historic national landmark in Lebanon, Tennessee – our “home”.

The Mitchell House, like Sigma Pi, has a rich history.  From it’s early beginnings as a home, to it’s reincarnation as a military school and then as a business office, the Mitchell House has been a symbol for change and evolution since being built in the early 1900’s.  Now, Sigma Pi will look to create a new chapter in the history of the historical landmark, while also introducing a new headquarters to build upon the fraternity’s legacy.

The Beginning of the Mitchell House

Started in 1905 and completed in 1910, the majestic stone mansion known as the Mitchell House was originally constructed by Dr. David Mitchell and his wife, Elizabeth.  The Mitchells, who were originally from Pennsylvania where Dr. Mitchell had accumulated a fortune from the coal mining industry, found themselves in Wilson County, Tennessee, when Dr. Mitchell chose to continue his education at Cumberland University.

Dr. Mitchell had already lived an interesting life up until the time he moved to Tennessee.  By the age of seventeen, he had graduated from a junior college in California, Pennsylvania, and immediately became a high school principal.  At twenty, he became a newspaper editor in Uniontown, Pennsylvania. However, he had a strong desire to continue his education, so he packed up with his wife and moved to Lebanon.

As a believer in God, Dr. Mitchell believed that his wealth was a result of his intelligence, and his intelligence was a gift from God.  He chose to donate thousands of dollars of books and furnishings to the university library, which then bore the name “Mitchell Library” for almost 90 years.  He also purchased a heating plant for Memorial Hall, and built a men’s dormitory on campus.

Dr. Mitchell purchased 450 acres from A.W. Hooker, the father of famous Nashville attorney John J. Hooker.  This was considered the most desirable land in Wilson County at the time.  Dr. Mitchell brought in craftsmen, architects, and stonemasons from Pennsylvania to construct his dream home.  In just five years, this team created a masterpiece – a beautiful building that captures the imagination and creativity of it’s namesake.

Standing the Test of Time

As the years have gone by, the Mitchell House has faced many obstacles.  The Mitchell family’s time in the house was short-lived due to many tragic events. First, the children contracted typhoid fever and Elizabeth nursed them back to health. However, soon after Elizabeth became ill, and just three days later, she died of typhoid fever at the age of 42. Dr. Mitchell was heartbroken and shortly after left the Mitchell House and moved to California, leaving behind his children to be raised by their maternal grandparents. Five years after their mother’s death, the children and their maternal grandparents moved to Florida.

The house sat dormant for many years, but was purchased in 1936 by Castle Heights Military Academy to be used as their junior school.  Until its closing in 1986, the Mitchell House was home to hundreds of cadets from virtually every state in the country, and also from many different countries as well.  The Mitchell House was a vital part of each of these cadets’ lives, and played a significant role in the Castle Heights military education.

After the school closed in 1986, the house again sat dormant, this time for about ten years.  This period of abandonment and neglect left the building in a terrible state.  However, the purchase of the building by the Lebanon-based Cracker Barrel Old Country Store, Inc., brought new life to the Mitchell House.

Cracker Barrel purchased the building for use as the executive offices for CBRL Group, Inc., the holding company for both Cracker Barrel and Logan’s Roadhouse restaurants.  Therefore, much restoration had to be done to make the space usable again.

The restoration project involved the stabilization, restoration, and adaptive reuse of the original structure.  Cracker Barrel worked closely with D.F. Chase Construction and the State Historical Society to identify what had been the intent of the original architect and what Castle Heights had modified.  This led to the removal of various add-ons and a return to the original appearance of the Mitchell House as it stood in 1910.  Components of the house, such as the handcarved, intricate woodwork was restored and brought back to life.  Exterior walls and roofs were reconstructed, primarily to insure that water damage would never be an issue again.

Every piece of the house that could be restored was kept, such as the large columns at the front of the house.  These columns had some irreparable damage, but minimal reconstruction and restoration allowed the original columns to stay.  The pieces that were too badly damaged were replaced.  This included the columns at sides of the house.  Mirrors throughout the house were replaced, but the doors worked well on their hinges and closed perfectly.  The wood throughout the house had absorbed moisture and swelled.  The drying out process of the building took place during the first year of restoration.  However, the gifted craftsmen on the project handled the challenge well, and the wood throughout the house is now nearly perfect.

The Evolution of Headquarters

The first Executive Office of Sigma Pi was established on May 16, 1927, at the home of Executive Secretary Harold Jacobsen in Roselle, New Jersey.  The purpose of a central headquarters was to bring together all the records of the fraternity, which would eliminate the remote work that had been done by the Grand Officers over the previous years from all parts of the country.  Within months, the office was growing rapidly.  By February 23, 1929, the office was moved to Elizabeth, New Jersey.  It remained there until 1963.

Through the efforts of Judge Curtis G. Shake (Α, Vincennes) and Dr. Isaac Beckes (Α, Vincennes) – who was also President of Vincennes University – the Shadowwood Estate in Vincennes, Indiana, was donated to Sigma Pi Fraternity upon the death of its owner, Colonel Eugene C. Wharf. The dedication of the building took place on August 30, 1962, in conjunction with the 26th Convocation at French Lick, Indiana.

In 2005, Shadowwood was sold and the fraternity moved to Brentwood, Tennessee to a temporary business location.  In October of 2006, a commercial property was purchased on Wilson Pike Circle in Brentwood, which has housed the executive office of the fraternity for the last seven years.

At the 50th Biennial Convocation in 2010 – which took place in Danvers, Massachusetts – Grand Sage Christopher Brown announced that Sigma Pi would be in a new headquarters by 2014.  He then appointed members to the New Headquarters Committee, who’s purpose was to investigate other fraternity headquarters and come up with a recommendation on the type of building that the fraternity would pursue.  The committee – made up of Mason Cozart (ΕΚ, Southern Arkansas), PGS Gary Tash (ΒΠ, Virginia), Les Wright (ΓΥ, Murray State), and Grand Second Counselor E. Andrew Morris (ΓΥ, Murray State). Justin Beck (ΖΗ, Santa Clara) was later added to the committee.  The results of their findings were presented to the Grand Council.

Through the efforts of Executive Director Michael Ayalon and the New Headquarters Committee, the Mitchell House was determined to fit the criteria that the committee had decided upon, and the purchase was completed in 2013.  This move signifies the improved and continued focus to bring Sigma Pi to the forefront of fraternal organizations.  The impressive building will give Sigma Pi a platform to create a truly impressive image as a national presence.

As we look toward the future, Sigma Pi will continue to go above and beyond to maintain the foundation that the Founding Fathers built for the fraternity.  The move to the Mitchell House is a new chapter in the history of Sigma Pi, and will continue to build upon the legacy that has been created over the past 117 years.