A Dedication and Celebration for our Veterans 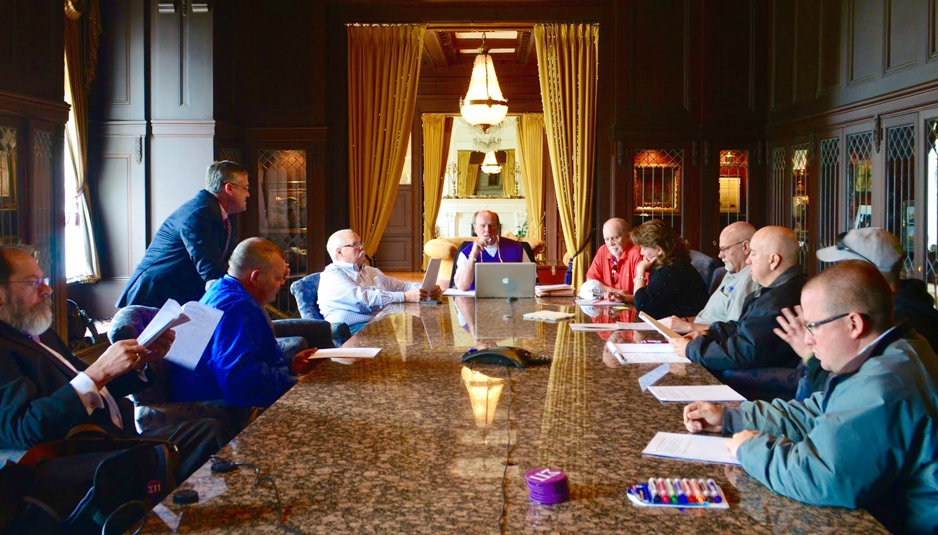 The Sigma Pi Veterans Memorial on the grounds of the Historic Mitchell House at the Executive Office in Lebanon, Tennessee has taken a step closer to reality.

At that time, an overview of the Veterans Memorial project was shared. The nine members of the Veterans Committee were thanked for their efforts. The announcement of the successful $50,000.00 fundraising effort to build and maintain the Memorial by soliciting $1,000.00 donations from 50 individual alumni (known as“The 50″) was made. Their generous donations will fund the construction costs and future maintenance of the Memorial, which will be gifted to Sigma Pi Fraternity.

The funds raised were presented to the Sigma Pi Educational Foundation, after which, everyone proceeded outside to the Memorial site where a symbolic groundbreaking ceremony was held.

The Veterans Memorial will consist of a nine-foot tall granite centerpiece, engraved with the words “Veterans Memorial”, and will be topped by a Sigma Pi Greek Cross engraved with our Greek letters. The centerpiece will be situated in the center of a 24’ x 24’ commemorative bricked area, also in the shape of a Greek Cross. There will be over 1,000 8” x 4” bricks available for engraving to honor and commemorate our Sigma Pi veterans. The outside arms of the Greek Cross will be surrounded by 136 8” x 8” brick pavers available to individual chapters to honor their veterans. The walkway leading up to the Memorial will also have bricks and pavers available for commemorative dedication. There will be three flagpoles installed at the head of the Memorial where the American flag, the Canadian flag and the Sigma Pi flag will fly. The Memorial will be lighted at night and will be a magnificent sight to behold and a wonderful addition to the grounds of the Historic Mitchell House. The bricks will be available for a donation of $250.00, and the pavers will be available for a donation of $500.00. These substantial funds will be held by the Sigma Pi Educational Foundation in order to fund scholarships for worthy Sigma Pi veterans. More details about the roll out of the brick/paver and scholarship program will be forthcoming.

Construction of the Memorial will begin on Tuesday, June 16, 2015. The dedication of the Memorial is scheduled for 6:00 PM on Saturday, July 18, 2015, at the Executive Office as the culminating event of Sigma Pi University when undergraduates and alumni will be on hand. The featured speaker and ribbon cutter at the dedication will be USMC MAJ GEN James Livingston (Alpha-Delta, Auburn ’62), a recipient of The Medal Of Honor during Vietnam. The nine members of the Veterans Committee, along with many of “The 50” will be on hand for the dedication, followed by a picnic dinner on the Executive Office grounds. All alumni, undergraduates and interested parties are invited to attend the dedication ceremony.

In the future, plans are for an annual ceremony of a laying of a wreath to commemorate our Veterans each Veterans Day on November 11th.