Grand Sage Travels: A Trip Around the Country

Written By: The Emerald
Features From the Grand Council Featured 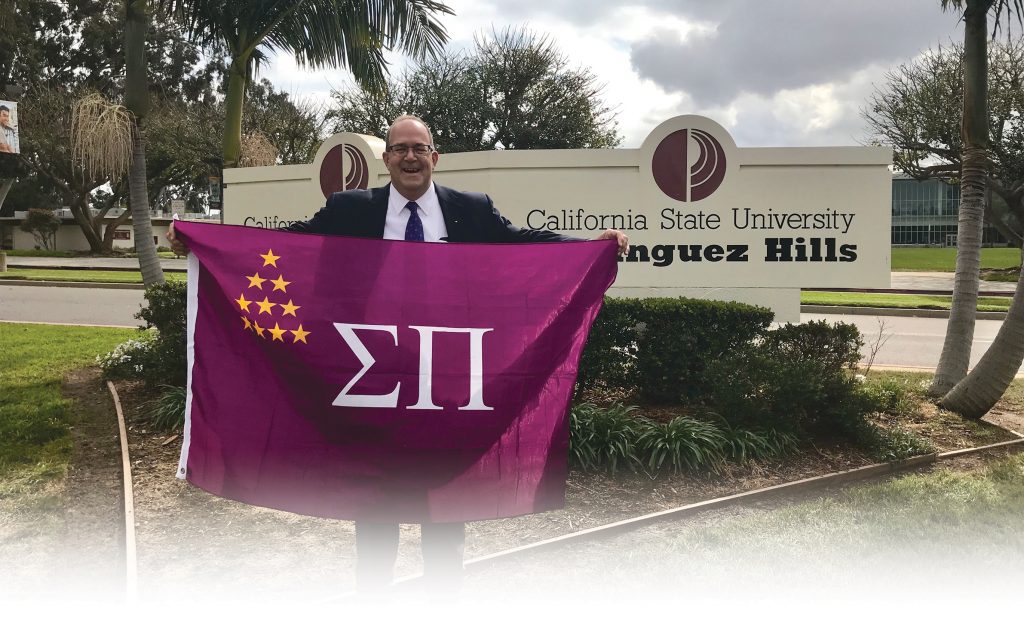 Over the last academic year, Grand Sage Steve Lawler (Iowa ’82) traveled across the country visiting chapters, meeting brothers, attending events, and so much more. According to GS Lawler, “it was important to show the chapters that I cared about their individual needs and opinions. I wanted to visit chapters in several regions to have a better understanding of what the international organization needs to provide to enhance a positive fraternal experience.”

GS Lawler traveled to the west coast and visited 11 chapters, the east coast for another 11 chapters, completed a mini Midwest tour visiting three chapters and finally, visited another six chapters down south.

Overall, GS Lawler stated, “every trip and every chapter was a memorable experience. The opportunity to see a broad section of the Sigma Pi world has been incredibly valuable in increasing my understanding of how Sigma Pi functions across the land. A huge thanks to Director of Strategic Growth Lanse Macke (Oregon State ’15), Assistant Executive Director Joe Drain (Florida State ’10), Executive Director Jon Frost (UMSL ’02), Grand First Counselor Les Wright (Murray State ’70), and Grand Second Counselor Joe Palazzolo (Monmouth ’03) for accompanying me in the different regions. Thanks to all the undergraduate brothers and regional alumni who took the time to welcome me to their chapter.”

GS Lawler began his adventure with Macke and Omega at Oregon State University to recognize their 1,000th initiate. They then traveled on to Iota at University of California-Berkeley, where Steve noted: “it was fun to experience everything about Berkeley.
The atmosphere on campus and within the community was remarkable.” GS Lawler and Macke then went on to embrace the beauty of Santa Clara University with Zeta-Eta, where he presented the Grand Sage Cup to Chapter leadership with Father Art Liebscher (Santa Clara ’69), a dedicated alumnus of Zeta-Eta Chapter. After that, they continued to visit and enjoy an excellent dinner with Iota-Eta at the University of California-Santa Cruz.

From there the duo traveled south where they absorbed the Central Valley of Fresno with Alpha-Xi at California State University-Fresno and the beautiful views of the ocean near California Polytechnic State-San Luis Obispo with Eta-Delta.

He wrapped up part one of his adventure with Eta-Iota at California State University-Dominguez Hills where he stated, “I was impressed by the efforts of the brothers and enjoyed a wonderful event at the UCLA alumni dinner.”

GS Lawler makes a point to attend most, if not all, chartering celebrations and Fairleigh Dickinson University-Florham was no exception. He took advantage of his time on the east coast with GSC Palazzolo as he guided GS Lawler through New Jersey and the chapters that lie within. GS Lawler noted, “the 11 chapters in the New Jersey Province are like one big happy family. They are involved with each other and support all the brothers and alumni as a high functioning province. The province is filled with energetic and passionate brothers who are enjoying a great fraternity experience and then graduate to successful careers in their chosen fields. The ocean and the people make the area a stronghold for Sigma Pi.”

They started their trip with Alpha-Mu at New Jersey Institute of Technology in which GS Lawler met with former Chapter Director Sam Givas and continued onto Delta-Epsilon at Seton Hall University where Michael Bizzoco (Seton Hall ’19) showed GS Lawler a Bloomberg Terminal, the same one he uses during his internship at Goldman Sachs. They ended their busy day with Iota-Iota at Montclair State University, and Delta-Beta at Monmouth University where GS Lawler attended a Monmouth basketball game.

The next day they traveled to Theta-Tau at William Paterson University, enjoyed lunch with Iota-Phi at FDU-Florham, and finished with Gamma-Eta at Rutgers University-New Brunswick.

From there they met with Past Grand Sage Don Cox (Temple ’55) and attended a Founders’ Day luncheon with Theta-Delta formerly of The College of New Jersey. They continued onto Zeta-Chi at Rowan University, Iota-Upsilon at Stockton University, and ended their day with a Founders’ Day event put on by the Jersey Shore Alumni Club.

GS Lawler finished his trip with a visit to Iota-Tau at St. John’s University in which he noted, “this was my first visit to St. John’s. I was surprised to find such a spacious and inviting campus setting in the middle of New York City.”

As he continued his travels, in mid-March, GS Lawler conducted a mini-tour through the Midwest by visiting and presenting on important health and safety issues at Southern Illinois University-Edwardsville with Delta-Omega and other Greek Life. While in the area, he also visited Iota-Zeta at the University of Minnesota and Delta-Zeta at the University of Missouri-St. Louis. GS Lawler commented, “these three schools provided the contrast of a college town school at SIU-Edwardsville, a university surrounded by the Twin Cities, and a commuter school in St. Louis.”

AED Joe Drain accompanied GS Lawler on his tour of the south. Together, they toured Iota-Kappa at University of Central Florida, Iota-Sigma at University of South Florida, and AED Drain’s alma mater Eta-Epsilon at Florida State, in which GS Lawler noted that “the Chapter is moving into an amazing house next year.”

GS Lawler commented on his trip down south, “after leaving snow-covered Iowa, it was nice to hit the warm weather in the south. The fraternity system is very strong in this area and I enjoyed the traditional fraternity culture of the south.”

Lawler noticed one thing during his various visits. “Every brother and chapter are different, but everyone wants the same things: brotherhood, a fun social life, a college degree, a great fraternity experience, and the opportunity for a successful career and happy life.”

GS Lawler has been an extraordinarily active and impactful member of the Grand Council, visiting nearly 50 chapters across the country over his four years and making numerous positive changes during this biennium. To him, “the most rewarding and memorable part of [his] term has been these recent tours of the country to bring the goodwill of Sigma Pi to the local level.”