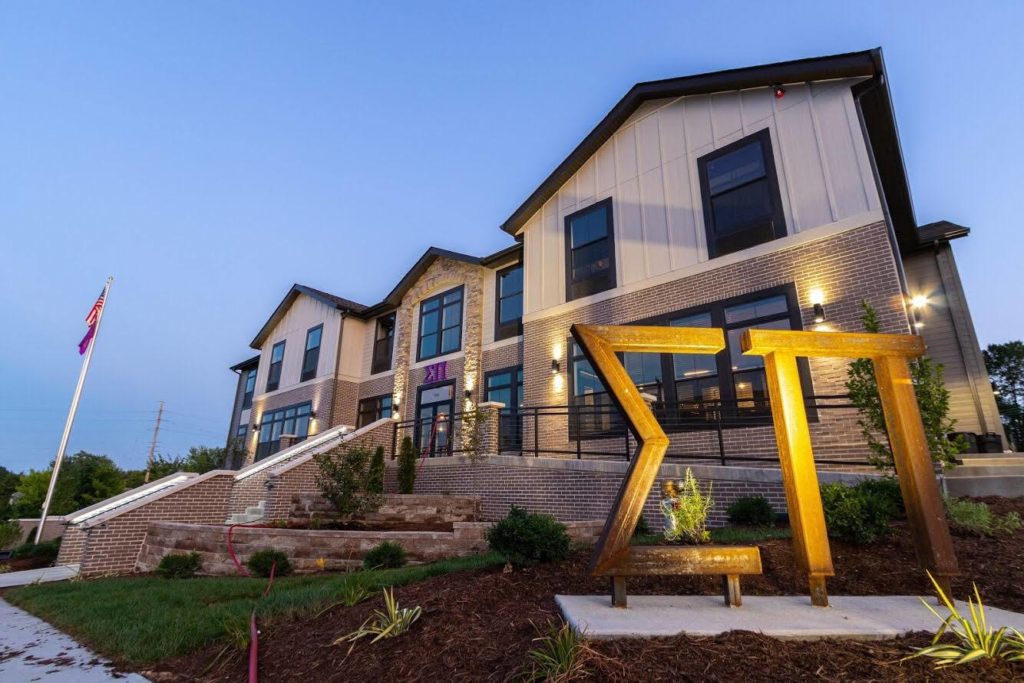 On August 3rd, 2019, Alpha-Iota Chapter at Missouri University of Science and Technology held the largest alumni event in our history, as we cut the ribbon on a newly constructed chapter house. The 18,000+ square foot home is a very modern approach to a fraternity chapter house. The new 66-man house replaces several small and mid-sized houses, built before World War II, that have been home to Alpha-Iota men since 1946. 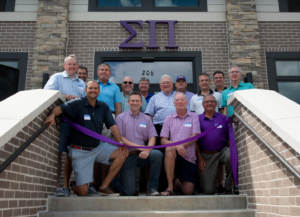 The project began in 2016 as an idea among three alumni members of  Alpha-Iota Building Association (AIBA) board of directors and a few alumni. That idea quickly grew into a committee of 14 brothers from across six decades of members, who volunteered to undertake a fundraising program that was initially going to be $1.6 million but grew to be much more because of early success. Some of the highlights of the project:

A more detailed article on the fundraising and construction can be found in the Winter 2018 Emerald.

There were many reasons why this project was successful. We gathered some large early donations from key alumni that provided early momentum, and we had a committed group of brothers working together on the campaign committee. One of the most important pieces contributing to the success was AIBA contracting with Pennington & Company, a fraternity consulting firm, to help guide our project. Pennington & Co. was critical for identifying potential donors, developing feasibility plans, and training the capital campaign group on how best to contact and persuade alumni to donate to this project.

As satisfying as the new house has been, the most significant result of this project was a strongly rekindled brotherhood amongst the alumni and undergraduate chapter.  During the fundraising, new connections between alumni across six decades drove us to achieve our common goal.  While we did work hard to gain commitments from brothers, we made sure that we celebrated our wins as well.  As we approached the beginning of construction in June 2018, the chapter hosted a Ground Breaking Ceremony.  This allowed alumni to visit the old house one more time and relive our past glories.  Upon completing the construction in August 2019, our alumni reconvened to cut the ribbon on the new house and rejoice in our success. 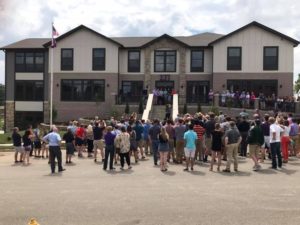 The gathered alumni and friends during the Ribbon Cutting Ceremony

Ribbon Cutting Weekend saw more than 100 alumni and guests return to 206 E. 12th Street for a weekend packed with events to revel in our success.  We began Saturday, August 3rd, 2019, with an opening ceremony on the new house’s front porch, with guests spilling out onto the street to listen to remarks from key alumni, thanking volunteers and contributors for their efforts.  When the talking was over, members of the campaign committee handed the keys to Sage Justin Carlsen, and campaign committee leadership cut the lavender ribbon, opening the house for guests to explore.  That evening, we enjoyed a more formal reception at the campus alumni center before returning to the new house for a casino night.

After the dust settled and alumni returned to their homes, undergraduate members moved in for the fall 2019 semester.  Everything was going well until . . . . Covid 19.   Alpha-Iota struggled, like most Sigma Pi chapters, through the difficulty of spring shutdowns, moving to virtual classes and meetings, and a complete upending of the fraternity recruitment process at MS&T.  Again, alumni volunteers answered the call, volunteering time, talent, and treasure to help support Sage, Third Counselor, and Recruitment Chair in preparing for the challenges of a fall semester under Covid.

During this time, Alpha-Iota Educational Foundation (AIEF) generously developed a scholarship program to assist the undergraduates financially and incentivize better grades and exceptional brotherhood.  The program rewards undergraduate members for earning a 4.0 during the semester and has other incentives tied to all house performance vs. other fraternities.

Meanwhile, Alpha-Iota Building Association offered some funds to the active chapter to offset rising dues from the Executive Office, support recruitment activities, and prepare and maintain the house under COVID 19 guidelines to keep members safe and healthy.  Through the entire summer of 2020, monthly calls were held, and action items divvied up to undergraduates and alumni to prepare for fall 2020.

In the end, it is hard to say who benefitted more from the work done to build a new house for Alpha-Iota.  The new residents’ feedback has been overwhelmingly positive, and there is a much better connection between the alumni and undergraduates.  The strengthened bonds of brotherhood among the alumni and undergraduates since the house was completed is undeniable and has resulted in more donations, more networking for career development, and more volunteers raising their hands to help guide and support the undergraduate men of Alpha-Iota.