Mountain City Alumni Club: The Rest of the Story 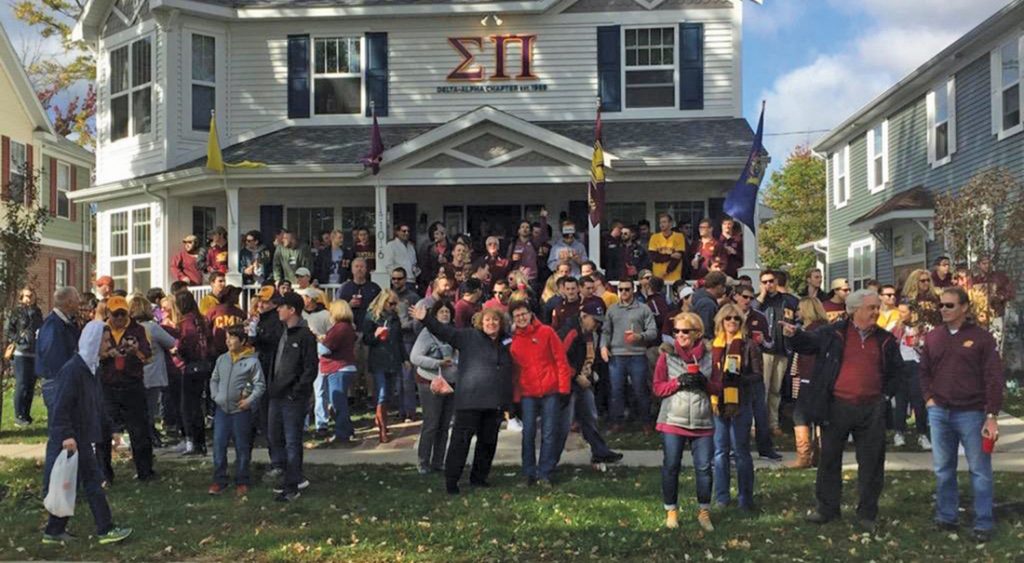 This story was printed in the Summer 2017 issue of The Emerald magazine.  If you do not receive printed issues of the magazine, but would like to, then please opt-in at sigmapi.org/updateinfo.

The Fall 2016 issue of The Emerald featured a timely article titled Re-engaging with the Fraternity: Alumni Clubs. The article presented ideas to initiate alumni clubs and contained a picture of Delta-Alpha Chapter in front of Central Michigan University’s Warner Hall with the picture titled Mountain City Alumni Club. As an appropriate follow-up to that article, here is the rest of the story of the Mountain City Alumni Club (MCAC).

As the article points out there are both regional and chapter alumni clubs. The MCAC is a chapter-based club for Delta-Alpha at Central Michigan University (CMU). The MCAC was originally chartered in 1982. As is the story with perhaps many fraternity alumni clubs, over the years there has been great involvement, but then in the late 1990s and early 2000s involvement decreased to nearly no activity. Life after college, marriage, raising a family, and career demands can all influence alumni involvement. In the case of the MCAC there were two primary events that shook the fraternity and our over 700 Delta-Alpha alumni to action. The first was the revocation of Delta-Alpha Chapter’s charter in August 2008 due to several infractions and, as is usually the case, a lack of active leadership and alumni involvement. Interestingly enough the Delta-Alpha chapter house is owned by the alumni. However, there were many financial issues that arose with the alumni running the chapter house, including back taxes owed and the risk of losing the chapter house.

The Chapter’s charter was revoked by the Executive Office and no brothers were allowed to occupy the chapter house with thousands of dollars in back taxes owed. Delta-Alpha alumni were presented with a difficult and desperate circumstance, but, thanks to the alumni who rose to the occasion, the proper steps were taken to get the chapter back to its former glory. Emergency meetings were conducted with the first step to place new alumni leadership in charge of the housing board – the Delta-Alpha Association (DAA). The DAA under new leadership communicated with all alumni to raise funds to pay the back taxes. After several months, $16,310.00 was raised to pay the back taxes. The house at 1016 South Main was no longer a fraternity house but it would be rented to CMU students and managed by the DAA. Once the house circumstance stabilized, attention turned to re-chartering the MCAC with new leadership. Elections were held and the MCAC board was formed. The board met with CMU administration to update them on the status of the then-inactive Delta-Alpha Chapter. With the house back taxes paid and new alumni leadership put in place, the MCAC discussed the possibility of having Sigma Pi return to the CMU campus. The proactive response in August 2008 from Sigma Pi and the relationship built with CMU administration left the door open to return to campus.

The MCAC re-chartered with the Executive Office on February 16, 2012. The 132 charter members were made up of the alumni that had contributed to pay-off the back taxes on the house. The re-chartering process helped drive the MCAC to put proper leadership in place, with a functioning board and bylaws to conduct business. With the MCAC alumni club now intact and functioning, membership growth and returning to campus became its primary goals.

Delta-Alpha Colony was well on its way to re-chartering. Yet another challenge arose for the Colony – what to do with the century-old house in need of major renovations and foundational repairs? Once again the MCAC provided the forum to discuss, debate, and decide what to do with the house. After a lengthy meeting and investigation of options, it was decided to demolish and rebuild the chapter house. While much of the cost could be covered, alumni contributions were necessary. The MCAC marshaled its resources and a fundraising chairman was identified. The MCAC raised $51,551 with 164 alumni contributing to the new chapter house. The Delta-Alpha Chapter now occupies the new house at 1016 South Main in Mt. Pleasant.

The story of Delta-Alpha Chapter demonstrates the difference that a lack of alumni involvement can make and the positives that can happen with strong alumni involvement and leadership. In our view, the alumni club must support the active chapter and maintain a relationship with the university, where possible. The MCAC and the role of an alumni club must extend to all alumni. The MCAC has established four social events, the thought being to establish four events and build a tradition around those events. This gives alumni brothers and their families the opportunity to get together, catch-up, network, and reminisce. The four events MCAC conducts are:

All four events are organized and operated by an alumnus. Homecoming has taken on particular significance in that the alumni club works directly with the active chapter to plan and fund homecoming. The MCAC also awards two $500 scholarships to deserving undergraduates at Homecoming. The award of each scholarship has generated competitive interest and excitement at Homecoming.

While the MCAC and Delta-Alpha alumni have many great accomplishments there are still challenges. Year-to-year fluctuations in membership and succession planning for key positions are primary challenges that the MCAC continues to face. Ideas such as regional alumni get-togethers and rush for MCAC have all been tried and continue to help maintain membership. While supporting the active chapter and CMU is vitally important and never ending, each time the MCAC conducts one of our social events new connections are made with brothers from different eras including brothers that we may not have been in contact with since graduation.

The story of MCAC continues to be written; with strong alumni involvement and leadership that story will continue for generations. The MCAC leadership consists of brothers that joined Sigma Pi in the late 1970s, 80s, 90s, and 2000s. By the way, that picture in the last issue of The Emerald was taken circa 1987 – about 30 years ago. Many of the brothers in that picture are today’s leaders of our alumni club. Before ending, we’d like to offer a special thanks and express our appreciation to all Delta-Alpha Chapter alumni that have contributed time, money, knowledge, and their leadership talents to our alumni club, active chapter, and housing association.

A member of Delta-Alpha Chapter not part of MCAC yet, or a Sigma Pi alumni wanting to learn more about joining an alumni club, can contact us at delta-alpha.com.