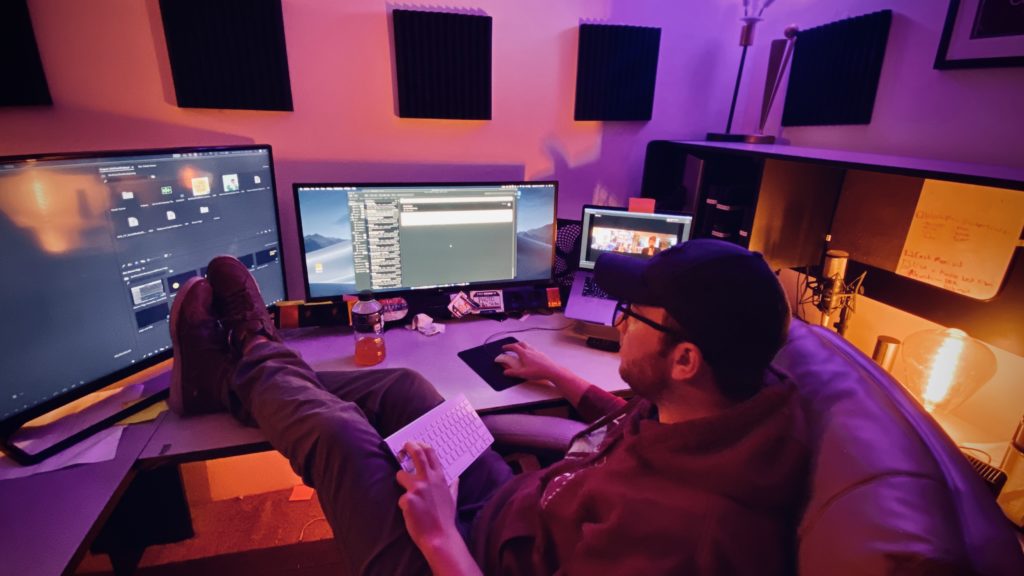 In case you missed it, the following feature is in the Winter 2022 issue of The Emerald. To read the issue, visit here.
The following article is written by Summer Clarkson, Assistant Editor. 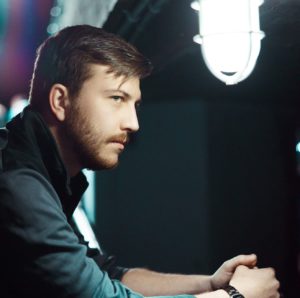 A broken drone, a secret handshake, and a Best Buy employee in small-town Auburn, Alabama… the power of brotherhood is stronger than you could have ever imagined.

Max Hauser (Wisconsin-Oshkosh ’14), creator of the 2021 Sigma Pi National Recruitment Video, shares his wildest story from his trip shooting chapters across the country.

While on site at Auburn University to shoot content with Alpha-Delta Chapter, Max’s drone breaks and needs wings. Max quickly heads over to Best Buy, but unfortunately, the wings were sold out, and the next pair would not be in store for a few weeks. To his luck, another Best Buy employee overhears Max pleading with customer service and walks over to give him the secret handshake.

Max was baffled entirely, and the man responded, “I heard you were a Sigma Pi; I’m from Murray State…” Max continues on to share about the video with Alpha-Delta Chapter and the Best Buy employee was unaware that a local chapter was less than five minutes away from him.

After a quick phone call, the Best Buy employee tells Max, “I have the same drone as you; my wife opened our garage door. Go borrow the wings off mine, fly it around, and just drop them back off when you finish.”

In that moment, Max knew the absolute power of the Fraternity… for a random Murray State Sigma Pi, who happened to work at that Best Buy, who happened to have the same drone and completely trusted a total stranger all because he had faith in the brotherhood of Sigma Pi.

All under a two-minute span, Max Hauser is able to capture the brotherhood, the history, the philanthropy, and more, showcasing how Sigma Pi Fraternity could benefit a potential new member.

This video highlights statistics on undergraduates, chapters, GPA, scholarships, and conferences while also displaying the fun of joining a brotherhood with service, events, intramurals and, not to mention the spotlight on these incredible houses and campuses across this country.  Max and his team have traveled to 15 chapters or events across nine states since 2020 to get a diverse feel of the Fraternity’s landscape.

Max also partnered with cinematographer Jon Kline to film some of the golf outings. Jon Kline’s website reads “He has been trusted to tell stories by brands including Nike, Rolling Stone, the NFL, American Express, Target, Wells Fargo, and AT&T.” He is currently preparing for a feature-length western, filming in Oklahoma in 2022.

When asked how he was able to capture so many dynamics of the Fraternity within this video, Max stated, “Honestly, it’s about showing what is already there… Brotherhood is already happening all over the country at any given point. Chapters are already raising money for important topics and helping the community, and in between that, they’ve learned to have fun with each other, and I think that means a lot.”

Max said the hope for the video is to “inspire a young man to join something that is good for his mental health, good for his professional health, and to just have fun and be young with a community that wants to be active in their campus.”

Max continued on to explain the goal of the video was to capture how each chapter is unique. To do this, Max sat down with the brothers at each chapter he visited and asked them directly, “what is special about THIS house” and “why did you want to be a Sigma Pi.” Once Max was able to better understand each chapter’s unique perspective, he was able to capture what is noteworthy to the brothers of this national organization across the country.

From his time on the road visiting chapters, Max learned one thing that makes each chapter unique is that with each location and university comes different experiences. Some campuses are near the beach, others rural, and some in the heart of a big city. Based on where each undergraduate brother is in the country, he will get the best of what each campus has to offer. Additionally to the campus location comes the origin of each brother; some brothers are from other cities, states, and even countries.

Max notes that even though fraternity men often get the stereotype of a “white guy in a polo,” he’s found that the most diverse men he’s had the opportunity to meet are the men of Sigma Pi. Each brother brings a unique perspective and diversity to the conversation. Max reflects on his time at Wisconsin-Oshkosh as an undergraduate where coming from a small town, he was able to learn a lot about culture, how people communicate and disagree, and come to compromise.

Having his eyes opened to other cultures and learning how to work with different people in his chapter helped prepare him for his career today. Max finds it easier to come into new situations and know how to understand a person’s needs.

More About the Man Behind the Camera

From a young age Max knew he wanted to be in the entertainment industry; what started as a child actor and model grew into a desire to pursue film. Max credits his passion for filmmaking to his mother, who encouraged him to follow his dream throughout his childhood no matter how unlikely the odds.

While in college pursuing film and directing, Max’s mother was diagnosed with Multiple Myeloma and an unclear prognosis. He recalls the uncertainty of the situation and the bills that stacked up, but his brothers of Sigma Pi stepped up when it counted the most.

The brothers of Gamma-Mu Chapter rallied together to organize a fundraising event for Max and his family. The funds raised allowed Max’s mother to get into remission. It’s been six years, and she’s still holding steady in remission.

While reflecting on the support his brothers gave in college, he said, “these brothers stepped up out of nowhere, and not only did it help a lot, it meant a lot to have their support.”

Shortly after graduating college, Max’s short film So We Bowl won awards at film festivals. Max has worked on a variety of projects, including corporate clients like Cisco, Roundy’s, Wilderness Resort and Water Park, H.O. Wolding, Amcor, and even filmed an episode of a television series on the History Channel. The list goes on and on of film projects, music video collaborations, and other documentary projects.

Max continued working and now is the owner of a production company called Liminal Vision Films, based in central Wisconsin. Liminal Vision Films is focused on creating exciting and provocative work internationally through documentaries, music videos, short films, and more. Max says the goal is to see between the lines of your story.

One of his biggest projects in the works currently is with musician Brett Newski. Max is developing a rock music documentary that has followed Brett, a determined indie songwriter, worldwide. The film features footage from the United States, Vietnam, Japan, Mexico, South Africa, and various European countries.

When asked what’s next for director Max Hauser and his future, he said, “continuing to direct films… your job should be fun, so accepting projects that I truly enjoy working on, like the Sigma Pi videos.”

Any brothers interested in venturing into the entertainment industry feel free to reach out to Max Hauser (Wisconsin-Oshkosh ‘14) at maxhauser.cinema.design@gmail.com directly for support.