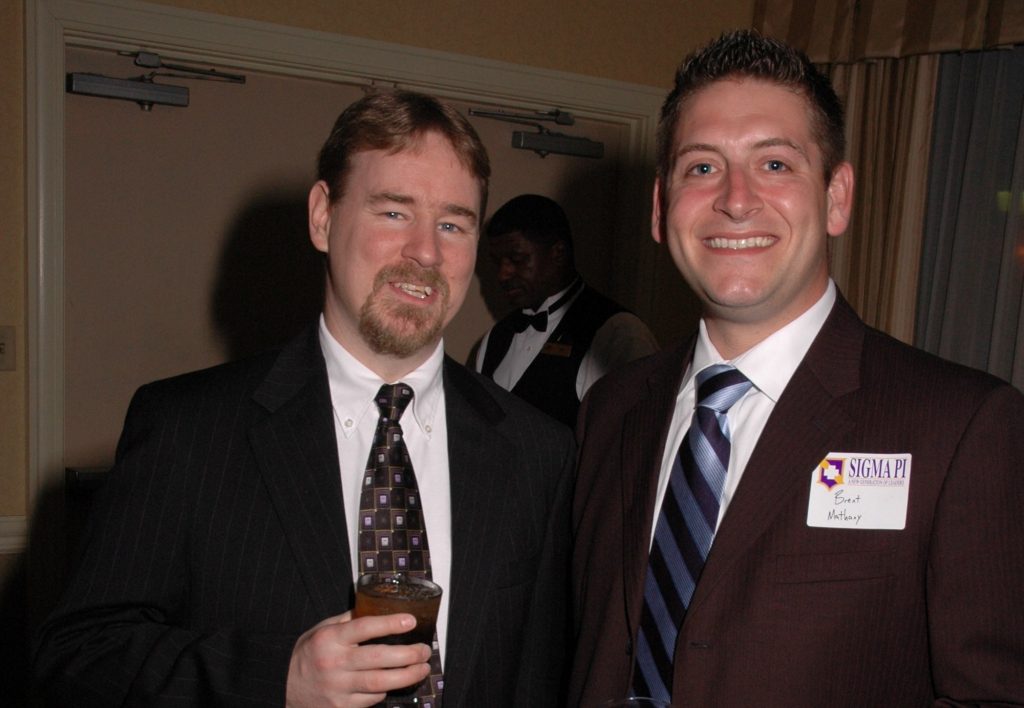 There are over 100,000 alumni of Sigma Pi Fraternity. There are some alumni who give back when and where they can; either with their time, financial support, physical labor on the house, filing paperwork for a Chapter or simply telling stories to the undergrads about the history of their Chapter. At Delta-Zeta, we have been lucky to have one of the most unselfish volunteers in the history of our outstanding organization; Tim Schonhoff. Tim initiated into the Delta-Zeta Chapter in 1991 when the Chapter was between 8-12 men. The 80’s had not been kind on the Chapter and operating at a University that has always been less than 1% Greek has never been easy.

Tim immediately became one of the most important brothers in the Chapter when he was elected 3rd Counselor not long after initiation. During his multiple terms as 3rd Counselor, Tim balanced the books, paying off the mortgage so the Chapter could own their house one day, paying all debts to the Executive Office and always making sure there was money for Greek Week and other bills. Tim was one of the backbones that got the Chapter through the tough times of low membership and low financial support. Throughout his time as an undergrad, Tim was Mr. Dependable and was a huge asset to the Chapter. He participated in Greek Week and was part of the Chapter when they won four straight Greek Week titles. He was always willing to get his hands dirty and do whatever was asked of him.

After leaving the chapter and becoming an alumnus, Tim was once again needed on the Housing Corporation. Tim was the Treasurer when property from the original house of the Chapter was sold, which led to new windows at the house the Chapter occupied for over 30 years until it was recently sold. Tim made sure that all taxes were paid, insurance was paid, the house was up to date on all safety and fire equipment, and was always there when another alumnus or an undergrad needed him. He was, like I said earlier, completely unselfish. He never complained or asked for anything in return, he just gave back because he knew it was needed by the undergrads and the Chapter.

Late last year, Tim told me that he was going to step down from the Housing Corporation after we sold the old fraternity house, and that was finally made in to reality in January of this year. After 12+ years on the Housing Corporation, Tim’s time had come to an end. He is still helping out as we search for his replacement, because that is who he is. We never would have sold the house without Tim, and never would have awarded the numerous scholarships throughout the years if it wasn’t for Tim, and the undergrads and alumni of the Delta-Zeta Chapter will forever be grateful. Tim is also a donor to the Educational Foundation, something that he believes strongly in.

I want to personally thank Tim for all he has done while serving with me on the Housing Corporation. Nothing that the board accomplished through the years would have been possible without his time, energy, dedication and guidance to the Delta-Zeta Chapter. Tim, quiet and unassuming, makes us all better alumni and volunteers. He left the Chapter and our alumni base a million times better than when he found it. Thank you Tim and enjoy “retirement”!