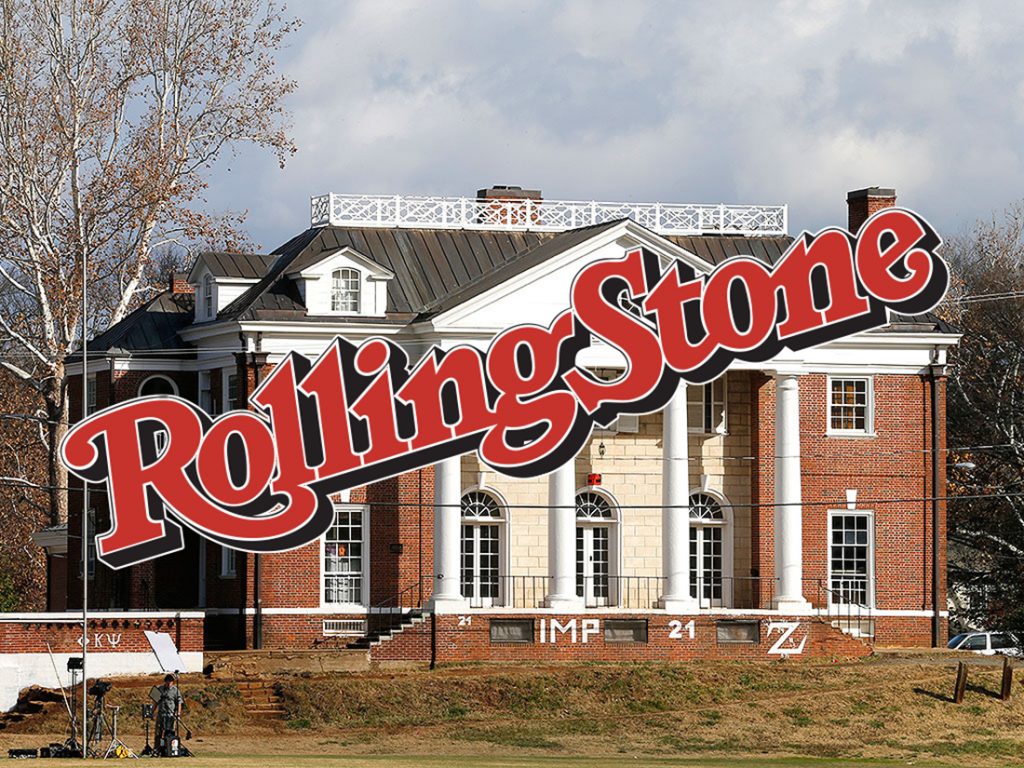 On December 7, 2014, The North American Interfraternal Conference (NIC) has released a joint statement with the Fraternity and Sorority Political Action Committee (FSPAC), and the National Panhellenic Conference (NPC) regarding the University of Virginia rape allegation made by Rolling Stone:

The Fraternity and Sorority Political Action Committee (FSPAC), the National Panhellenic Conference (NPC), and the North American Interfraternity Conference (NIC) believe recent events show the need for a comprehensive reevaluation of many issues related to students and sexual assault on campus.  We are saddened at the lack of journalistic integrity Rolling Stone demonstrated in publishing its article on campus rape at the University of Virginia.  The reporter and magazine’s reckless actions have many negative impacts on higher education that cannot be fixed with a simple apology.

First and foremost, this article sets back the fight against rape and sexual assault, marginalizing and discouraging true victims from stepping forward.  Fraternities and sororities will continue to educate students about how to intervene and prevent sexual assault, and how to support all victims of campus sexual violence.   We believe anyone who has committed sexual assault should be prosecuted to the full extent of the law.  We will not allow the Rolling Stone article to undermine our intent to be leaders in solving the problem of sexual assault.

Second, the reckless Rolling Stone article set off a chain of events that led the University of Virginia to suspend operations of all fraternities and sororities for the remainder of the school term.  This decision was made before an investigation into all of the facts alleged in the story was completed and it was not consistent with the law or university policies.  The school’s decision to suspend hurt the reputation of thousands of outstanding student leaders in our organizations who had nothing to do with the alleged events described in the article.  As a result, the University’s rush to judgment has caused great harm and emotional distress to the members of Phi Kappa Psi and many in the fraternal community.   We believe universities must demonstrate more respect for the fundamental rights to due process and freedom of association for students and student organizations when allegations of misconduct are lodged.  A rush to judgment on campus all too often turns out to be wrong, especially when applied at the organizational level.

Third, we call on Congress and state legislatures to look seriously at the complex issue of how to handle sexual assault on campus.   We believe any crime that involves bodily harm – which automatically encompasses any sexual assault – should be handled primarily in the criminal justice system, regardless of the accused’s status as a student.  Congress should examine whether the public interest is being served by forcing sexual assault cases into a campus judicial process. We believe campus processes lack the necessary skill sets, resources and capability needed to reach the right decision and many who work with these issues contend campus conduct bodies will always lack this expertise despite the best of intentions of those who work with Title IX and sexual violence on campuses.

Finally, we call on the University of Virginia to immediately reinstate operations for all fraternity and sorority organizations on campus, to issue an apology for its actions of the last two weeks, to publicly explain and release all records for the basis of its decision to suspend our organizations, and outline what steps it will take to restore the reputation of our groups and students at UVA.

The National Panhellenic Conference (NPC), one of the largest organizations advocating for women, is the umbrella group for 26 national and international sororities. NPC sororities are located on more than 675 campuses with 353,345 undergraduate members in 3,184 chapters. Alumnae are represented in 3,773 associations throughout the world. For more information, including a complete list of NPC sororities, visithttps://www.npcwomen.org/ or find NPC on Twitter and Facebook.

Founded in 1909, the North-American Interfraternity Conference is the trade association representing 74 International and National Men’s Fraternities. Through advocacy, collaboration, and education, the NIC works to ensure that fraternities can operate in an environment conducive to their success.