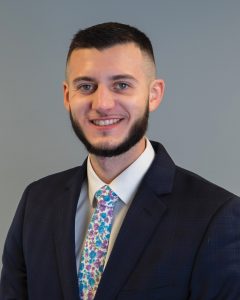 Prior to this role, Camilleri served the Executive Office as the Assistant Director of Volunteer Education. He also served for one year as the Chapter Management Associate for Tier IV chapters.

Camilleri is a first-generation college student who graduated from Saginaw Valley State University with a degree in exercise science in which he hopes to one day pursue a master’s degree in sports administration to become an athletic director. Camilleri served Theta-Beta Chapter at Saginaw Valley State as Vice President for two years and Recruitment Chair for one year while also being on Athletics Chair and Public Relations Chair.

In his time at SVSU he helped his Chapter win Student Organization of the Year, win Greek Week, win Homecoming three years in a row, helped his Chapter receive a Top 25 Grand Chapter award, and helped organize a 5k that won Theta-Beta a national award. He has recruited over 40+ men to join his Chapter and pursue their quest for excellence.