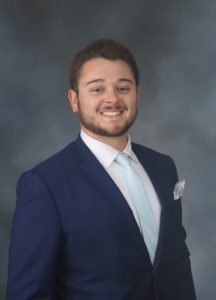 Drew Carpenter (Middle Tennessee ’18) serves as Director of Strategic Growth. In this role, Carpenter will meet with universities and create a pipeline for further market penetration while also having a small portfolio of current chapters that need growth assistance and manage the process for alumni-funded chapter expansion efforts.

Carpenter graduated from Middle Tennessee State University, where he majored in community and public health, with a minor in music. As an undergraduate, Carpenter was highly involved on campus, from Ambassador Program President, IFC President, MTSU Red Cross Club President, to MTSU Homecoming King, and five-time Dean’s List recipient, to name a few.

Outside of the office, Carpenter loves to travel, having visited 23 states and with hopes to see all 50 states by the time he is 30. Carpenter also enjoys playing the trombone and is learning to play the electric bass.